Come Walk With Me

Legend, a while back I was watching you play — running, laughing, showing out like three-year-olds do. You looked so happy, so unaware of all the turmoil from the last few years. The COVID-19 pandemic, mass shootings and police killings, the 2020 presidential election with the chaotic transition of power, and the storming of the United States Capitol by armed, violent rioters waving the Confederate and Gadsden (Don’t Tread on Me) flags intent on overturning a fair and democratic election.

As you stood in my driveway learning how to throw a rock, I said to myself, “that kid doesn’t have a care in the world.”  Why would he – just look around. He is  surrounded by people who love him, Black men who love him — all of us committed to modeling traits a Black man needs in this world: faith in God, courage, intelligence, strength, character, and compassion. 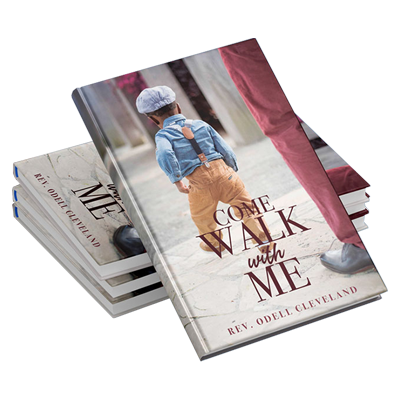 Get your reserved copy of Walk With Me before it hits the stores.

Legend Emmanuel Cleveland – my grandson – when you learned to talk, I  wanted you to call me “Old Dad.” That was your Grandma B (Beverly Richardson Cleveland – my wife since December 21, 1985)  grandfather’s nick name, and carrying on the tradition of his name was a way for us to honor him. You couldn’t quite pull off the “old,” though. It sounded more like, “Oh Dad” and that was hilarious and adorable at the same time. Legend, I’ve been writing this book in my head since the day you were born.  Maybe even before your dad (Calvin Odell Cleveland III) married your mom (Robin Monet Lee).  Now that you’re here, I look into those bright, brown eyes of yours and think, “He made it – Legend Emmanuel Cleveland made it.”

Legend, you are too young to understand, but you live in a very large house that is positioned in an influential neighborhood located in Charlotte, North Carolina – a city  known for having a reputation of abundance and opportunity. Both of your parents have undergraduate college degrees along with an MBA which opened the door for good-paying jobs that hold the promise of increased wealth for your future. Every weekday, they strap you into one of the safest and most technologically advanced vehicle and drive you to a home daycare owned and operated by an educated Black woman who understands early childhood theory. On weekends, you take swimming lessons at Goldfish Swim School, then listen at night as your mom and dad read your favorite dinosaur books over and over again.  Your toys are specifically designed to stimulate your cognitive development and language skills, and your meals are primarily healthy  followed by desserts more likely to be different types of fruit rather than high sugar treats.  My grandson, you’re celebrated like a king on your birthday, and even though you’re not quite old enough for kindergarten, there’s already a college savings account in your name.

Legend, I want you to know that I had none of those things growing up, but understand that’s not a complaint with any jealous intent.  The truth is Old Dad was poor.  Not just poor, but ‘po’ because we couldn’t afford the ‘or.’  I was a little Black fatherless boy living in Charleston, South Carolina during the 1960s, but I was born in Greenville, South Carolina.  We moved to Charleston when I about  5 years old, and it’s  important I mention that the state of South Carolina is known for being a place that didn’t encourage the advancement of Black people.  In fact, the removal of the Confederate flag from the grounds of the State House didn’t happen until 2015, approximately 55 years after I was born.  This racist environment created a life for me that was all too familiar for Black children born in the South during the 1950s and 1960s.  My story is the story of thousands, if not millions, of Black men who are around my age.

I’ve heard White teachers and administrators describe me as “slow” or “undisciplined” as they justified making me repeat grades, while they failed to discipline misbehaving White students.  I’ve felt the sting of being called the N-word by White classmates, some of whom were just as poor as I was, but in their minds, superior because of the color of their skin.   I’ve watched with anger as less qualified co-workers were promoted ahead of me for corporate sales positions because managers believed White people wouldn’t do business with a Black educated man like myself.  In some ways, I’m ashamed, but still feel compelled to share with you that at times during my younger life – I hated White people.  I hated them as individuals for all the hurt they imposed on me (specifically – teachers,  principals, classmates, and bosses) and as a race of human beings.

Legend, part of the reason why I’m writing this book is to tell you how a little Black boy from South Carolina who failed both third and fourth grade, and barely escaped being placed in a special education program in the third grade because his teacher said he had developmental learning disabilities became an educated, respected leader in his community.  Yes, chubby little 10-year-old Odell (Dell) Cleveland never could have imagined the life he would one day create for himself through God’s grace and mercy.  Graduating from college with a degree in management, becoming an ordained Baptist minister with a master’s degree in Divinity, Co-founding and serving as President and Chief Executive Officer of a faith-based nonprofit (The Welfare Reform Liaison Project) which received national recognition for helping people end the cycle of poverty and dependency.  Little Dell grew up to become Rev. Odell Cleveland, Chief Administrative Officer of Mount Zion Baptist Church of Greensboro, North Carolina – a predominantly African American church with approximately 7,000 members.  Yes, Rev. Cleveland has been sought out for his views  on how poverty impacts health care by former United States House Speaker Paul Ryan and Melissa Rogers who served as Director Of The Office Of Faith-based and Neighborhood Partnerships during the Obama administration.

Legend, when I think about how my life has changed so much over the last six decades, it’s as if many of the events that happened to me actually happened to someone else.  I can almost imagine that it was some other little Black boy amid the rolling, red-clay hills of Greenville or on the cobblestone streets of downtown Charleston. At times, I reflect and return to get that little boy and he reminds me of just how ‘po’ we were and how hard our lives were back then.

My memories as that little boy returns in flashes, often interrupting my thoughts when I least expect it.  I see my mother (Glenda Adams Cleveland – your great-grandma) who I affectionally call Mommy.  She was a divorced woman, crippled by a stroke at age 25, who was raising four children younger than the age of 10 on a  disability check and support from her family.  I see myself walking happily into school in the fourth grade, carrying a present  that contained a new model car wrapped in Sunday comics tied together with twine, feeling so proud to finally have something to contribute to the classroom Christmas gift exchange. I see the teenage me, a star athlete who was popular, tall and muscular hanging outside of the school cafeteria guarding the secret that he didn’t have enough money to pay for lunch.

Those are some of our family stories I want to share with you Legend.  “Come Walk With Me” is a chance for you to know your Old Dad better, and to hear about the events that shaped his life, and how those experiences influenced his  decisions as a father and grandfather. But that’s only part of the reason for this book. One day I pray that you will  understand that the other reason why I’m writing this book is to assist in teaching you how to live in this world as a smart, hard-working Black man and I want to full fill that dream before I leave this world and transition to the next.

Chances are, you’ll never know poverty, especially at the same level I experienced, but I believe that one day you will know Blackness, and experience what that feels like through the eyes of a Black man.  Legend, it’s a combination of humiliation and resentment when women clutch their purses or lock their car doors as you walk by. It’s the reluctance to drive your luxury vehicle in a small town late at night for fear of racial profiling or the sickening feeling in the pit of your stomach when a law enforcement officer pulls you over for “driving while Black.”   Your future as a Black man makes you different from your beautiful baby sister, Callie. She will learn to recognize societal prejudices and biases as she develops into a strong, intelligent Black woman, but she won’t experience the same level of scrutiny as a Black man. To survive, you must be courageous while displaying conduct and character above reproach, and your  understanding of artificial intelligence must be sharp.

Through this book, it is my hope that you will come to know your ancestors who were people rather than possessions, starting with my great-great-grandmother (Martha Ann Gary (1876 – 1968) | daughter of Ellen and Ambros Gary) and the things she endured to survive in the small town of Abbeville, South Carolina where she was born.   You will be introduced to her daughter (Mary Lou Wair (1894 – 1984) | daughter of Martha Ann and General Gary), and her child (Tecumseh E. Adams (1916 – 1988) aka Papa T | son of John Cato Adams and Mary Lou Gary-Wair) who returned home from World War II to find that unlike in the Central Pacific, he was still treated as a second-class citizen in the United States. Your family history won’t end there because you’re going to hear more stories about my mother (Glenda) and you’ll also get a chance to hear about your dad growing up with his brother (Tecumseh “Uncle Tee” Cleveland) and Uncle Adrian who we consider to be our third son.  Lastly, you’re going to learn so much more about my life journey, which is almost a bridge between two worlds.  One where I had to scrape to survive, and the other living a comfortable life as an upper middle-class professional. My life has overlapped with seven generations of our family members, and I believe I have a shot at eight if I am blessed to live long enough to see you have children.

Legend, as I close this introduction, I want you to know that “Come Walk With Me” is not only for you.  It’s also an invitation to anyone and everyone who wants to join us in our journey to learning how race and racism operates in America – I figured you wouldn’t mind if they eavesdrop.  And if you’re ever asked by anyone, “what can I do to improve race relations and make this a better world”, you can tell them “Listen  – my  grandfather  always said that the most important thing you can do is Come Walk With Me and listen.”

Focusing his work on both the reader’s head and the reader’s heart. The four books he has authored or co-authored reflect chapters in his life that reveal lessons relevant to individuals and communities struggling to address social issues.

Subscribe Below to get the exclusive preface of Come Walk With Me.